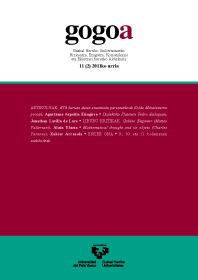 The aim of the present article is to focus on a crucial theme in Platonic philosophy, namely dialectics. To do so, we will base our analysis on a dialogue called Phaedrus. The dialectic method, which was essential in posterior dialogues as the Sophist, the Statesman and the Philebus, was first mentioned in the Republic; however, it is not until Phaedrus (Plato, Phaedrus 265d3-266c5) that we can find both a formal and general explanation of it. If our hypothesis is correct, Phaedrus not only provides a theoretical definition of it but also puts it into practice. Thus our analysis will delve into it at two levels, the theoretical and the dramatic one, in an attempt to draw conclusions both from its definition and its practical application.

Furthermore, this approach will oblige us to look into several of the key issues of the dialogue. Phaedrus' problem with unity has been the core of debate since time immemorial, giving rise to comments and discussions even today. Our examination will try to highlight how important it is to understand that apparent lack of unity to be able to grasp the message within the dialogue. In other words, we will be unable to comprehend the dialogue accurately without discovering its deep unity. Hence, it will be required to mention other problems dealt with in the dialogue and which are recurrent themes in Corpus Platonicum. Amongst other issues, we shall discuss what philosophy, love and rhetoric meant to Plato.

In short, the article, which should initially limit itself to the theory of knowledge afforded by one of its dialogues, will be of a much more general nature and target a number of key issues in Plato's philosophy.