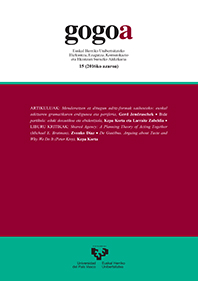 This article deals with the morphological reflection of the interaction between argument relations and TAM exponents in Basque, as well as the diachronic, sociolinguistic, and diatopic variation observed in this area. The more an inflected auxiliary represents marked values, the higher its proneness to obsolescence. This explains why certain auxiliary forms are virtually non-existent in corpora. Moreover, morphemic obliteration and routinization lead to the reanalysis of once polymorphemic sequences to a single morpheme. If they are sufficiently frequent, such morphologically complex forms are then stored as 'single processing units'. Less frequent forms in contrast never enter the morpheme inventory as fused morphemes. As a result, they are marginalized and pushed to the periphery of the linguistic system. The discrepancy between the combinatorial potential of verbal morphology on the one hand, and the frequency of forms in real-language corpora has important consequences for an adequate description of the language as well as its development. The possible number of forms is immense – this is why we find large numbers of tables with elaborate paradigms in most grammatical descriptions of Basque. However, these descriptions produce a false impression, as present-day spoken Basque uses only a small subset of all possible forms. The two approaches —list all the possible forms vs. list frequently attested forms— can be unified though, if we locate possible forms along a cline leading from the core of the grammatical system to its periphery. Whereas the core contains the most frequent and stable forms, the outer periphery contains forms which exist only in theory, with intermediate forms being subject to a great deal of intra-speaker, inter-speaker, and interdialectal variation. And while a peripheral form does not violate any grammatical rule, (most) speakers will avoid it, as their primary aim is not to exploit the morphological potential of the system, but to make themselves understood. The concepts of core vs. periphery can be applied to other grammatical systems where an inflation of morphological forms leads to a hierarchical organization of the system. As for linguistic typology, the Basque scenario is an illustration of what is likely to happen when a language is simultaneously high on the indices of synthesis and fusion.