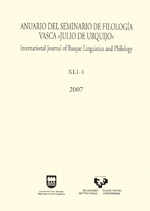 Although Astarloa's Plan de Lenguas remains lost, a copy of a fragment of the manuscript was found among the papers of the Humboldt legacy. In this article the history of Plan de Lenguas is delineated, and then we introduce the life and works of Pablo Astarloa (1752-1806), emphasizing his relationship with Humboldt. The main part of this article is devoted to exploring the theoretical bases of Astarloa's ideas about the origin of human language. Astarloa proposed that Basque language was the primitive language of the mankind, and consequently that it was a perfect language. Moreover he believed that the first language was natural, nor infused by God nor invented by humans, so he aligned with French sensualists. To justify his hypothesis he developed a set of requirements which must be fulfilled by that primitive and perfect language, according to Nature's purposes: propriety, or analogy between form and mean, economy, and eupho­ny. Astarloa tried to prove that the only language which satisfied those requirements was Basque, and hence he concluded that Basque was the language spoken by the first humans.