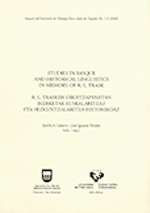 In the central and western Basque-speaking regions there are two main accentual types: In the Northern Bizkaian area we find a pitch-accent system with demarcative phrase-initial rises and uniformly falling (H*L) accents, on the last syllable of the phrase in the unmarked case. In the rest of the area the general rule is postinitial accent. This study tests the hypothesis, advanced in previous work on this topic, that one of the ways postinitial accent has historically developed is through the reinterpretation of phrase-initial boundary rises as accents, possibly under the influence of Spanish, a language in which non-phrase-final rises from valleys typically correlate with the location of stressed syllables. The results of our experiment confirm that this is a plausible historical scenario. Both native Basque speakers from other areas and, especially, Spanish L1/Basque L2 speakers show a strong tendency to perceive primary accentual prominence on the postinitial syllable in Northern Bizkaian speech, regardless of the actual position of the accent, except for initial accent.